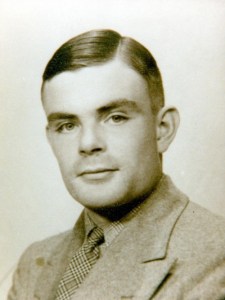 “When the bombs were dropping we didn’t run. To have run would have shown panic and to panic was unpatriotic. So we walked. Even with the bombs whistling down overhead we walked.”

My Grandmother rarely spoke about her years as a nurse with the British forces. Her memories were too hideous to recall.

Tom Brokaw named her generation the Greatest Generation because they were strong in a way that we can hardly even imagine today. They were the right people in the right time, raised in the depression and hardened by war.

We try and try to comprehend what they went through. We try to understand the level of depravity that occurred under fascism but our minds are unable to fully grasp the atrocity that was world war two. No matter how many movies we watch or books we read we will never fully comprehend just how terrible it was.

One key member of the Greatest Generation was the brilliant British Mathematician, logician and cryptanalyst, Alan Turing. Turing was the genius who broke the Nazi Enigma Code and shaved an estimated two to four years off the length of the war. In short, he saved millions of lives.

When Turing broke the Enigma code, Britain was able to translate German radio transmissions and gain the advantage in the key battles that ended the war. Britain was never invaded because of Alan Turing. I owe my life to him. My mother owes her life to him as did my courageous Grandmother. Alan Turing was the right man at the right time. He was a genius and a war hero. He saved our lives.

And yet, his story doesn’t end there. He also created the forerunner to this laptop I’m now holding. So because of him I’m alive and I have a computer through which I can see and communicate with the world. Alan Turing’s contribution to our lives is immeasurable.

And yet only a handful of years after giving such service to mankind, he was oppressed by the very society that he had worked so hard to preserve. He was arrested and oppressed for being gay.

I’m at a loss for words as I write this. I’m at a loss because this great mind, this great man, this genius who saved millions, died under the oppression and degradations of a homophobic government. Turing, who had hurt no one, and saved millions was sentenced to chemical castration for being gay. He committed suicide a few years later.

So this is how we treat our hero? England apologized decades later for “the appalling way he was treated,” but how can that be enough? It isn’t and can never be.

If it wasn’t for this man everything we are and know would not exist. Our entire way of life would be exterminated. Many of us would never have been born. Whole races, whole societies would have been obliterated from history under the Third Reich.

I’ve wrestled with this Post War atrocity ever since seeing Benedict Cumberbatch’s brilliant portrayal of Alan Turing’s life in The Imitation Game. I’ve wrestled with the uncompromising sensibilities of a society that put such importance on its version of propriety that it could not see a hero past its archaic concept of right and wrong. And I’ve been enraged by the ongoing homophobia that my son has seen in his own elementary school. When will this stop?

It comforts me to think that maybe Turing is again, the right man at the right time; a hero in the war for the freedom of every individual to live and love as he or she chooses. None of us has the right to judge anyone for being other than what we expect them to be. And please let’s remember, the one you judge and persecute today may literally save your life tomorrow.

One thought on “The Imitation Game”